Our final Hatches presentation is by Bart Lombardo

People took some time this week to enjoy our holiday Bubba Stocking and it was nice to see some new faces mixed with the familiar characters that make Shannon's what it is. Water has been high and that is the story for much of the year especially since July. Midges like the standard Zebra Midge or some of the shop's creations such as Lenny's Hot Bead Midge have been solid producers when trailed behind a heavier weighted nymph. Dave McKenna who is still affiliated with Douglas
555 views0 comments

Looking Back And Forward: 2018

Tim Flagler of Tightline Video will be our featured tyer this Sunday December 23rd. Class begins at 9:30 am. Len Ruggia will continue his Beginner Class on Saturday morning at 9:30am. Every December I find myself entering the month just trying to stay ahead. Planning our Bubba Contest which is underway and lining up our great roster of tyers with Shannon's Co-Owner, George Cassa is what it means to get the shop ready for the holidays. It is a frenzy of planning but there soon
366 views0 comments 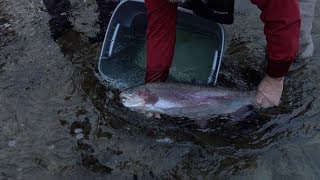 Well, it is officially now the holiday season at Shannon's as Bubba has once again made an appearance in Califon. Two large tagged trout, one Brown and One Rainbow are now officially at large along with several hundred other trout including an impressive number of larger Brown, Rainbow and Tiger Trout. The fish are part of our annual program and come from the Musky Hatchery in Asbury, New Jersey courtesy of Vern and Jeff Mancini. This is a catch and release contest to secure
596 views0 comments

Finally, Water Levels Are Coming Down!

The weather this past month has been difficult to say the least. I would be more pessimistic if my Giants hadn't shown me at least some signs of life! It has been a waiting game. We've kept ourselves busy at the shop tying flies and getting ready for the holidays. Our Fly Tying Program has started. Len Ruggia is teaching the Introductory Class on Saturday mornings starting at 9:30 am. Beginners just need to show up; the classes are free and we have some kits they can use for
550 views0 comments